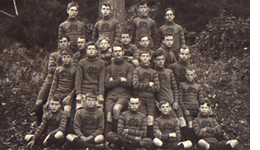 Pine Island Camp was founded in 1902 by Clarence Colby on Pine Island, a beautiful small island in Great Pond, the largest of the Belgrade Lakes in central Maine. Colby's original ideas and ideals are very much present at Pine Island today and the philosophy he established is as important and relevant to young people today as it was over 100 years ago. Independence coupled with a concern for others, cooperation, an intelligent sense of humor, honesty, and respect for the natural world and how to experience it safely are all things we strive to teach boys each summer. 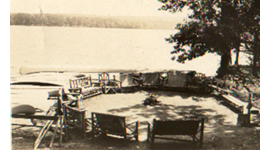 Dr. Eugene L. Swan bought Pine Island Camp in 1908. An exponent of a vigorous outdoor life and a pioneer in the camping movement, Dr. Swan laid down the outlines of our adventurous tripping program and many of the unique traditions that define Pine Island. His son, Eugene L. Swan, Jr., took the helm in 1947 and was actively involved with the camp until his death in 2000. Jun, as Pine Islanders knew him, opened the Whitehead Island outpost and brought a master teacher's warmth, humor, and imagination to the camp. Montague G. Ball, Jr., a career educator, led the camp through the 1970s and 1980s and was renowned for his humor and masterful storytelling.

Jun's son, Ben, a camper, counselor, and assistant director and also an experienced teacher, became director in 1990, along with his wife Emily as business manager. Together they saw the camp into its second century, now as a not-for-profit organization, and have worked with the board of directors to create a smooth transition to the next generation of Pine Island leaders. With Sumner Ford, Pine Islander since the age of nine, as director, and veteran staffer Sarah Hunter as communications director, Pine Island's long tradition of strong leadership continues.